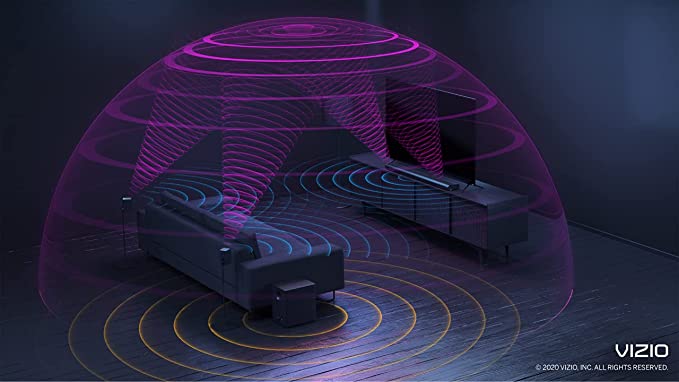 Vizio’s Elevate Soundbar is more than just a soundbar - it’s a whole system. Two satellite speakers and a subwoofer are included to instantly level up your home theater.
Ben Jacklin
3 min read

The Vizio Elevate soundbar is a wide “soundbar plus” system that includes a wide soundbar and quite a big and bulky sub.

Some have described this system as being overly bass-heavy, and while some audiophiles might not find this to be the most satisfying soundbar for recreating the high register sounds, it does a good job of creating a genuine immersive soundstage and performs well for film and television use.

The Vizio Elevate soundbar presumably gets its name from the fact that the speakers on the sides “elevate” upwards when you are listening to DTS:X or Dolby Atmos content. This happens automatically, which is quite an impressive use of technology. It creates a much wider soundstage.

You can also choose to use the speakers in this elevated mode whenever you want, so you can choose the wider soundstage for listening to music, too.

The speaker setup itself is not necessarily revolutionary, but it gives a 3D effect, providing five main channels and a separate subwoofer, as well as four overhead channels. These provide you with the impressive overhead sounds, which are particularly good for cinematic sound effects such as the helicopter moving across the scene or forest sounds projected from above.

Though it isn’t the most stunning clarity we’ve ever heard out of the box, it does greatly enhance cinematic experiences especially.

There are four EQ settings, and the option to tweak comes in very handy for getting rid of some of the excessive bass coming from the subs.

As already mentioned, the system offers support for DTS:X and Dolby Atmos content, and it is simple to connect and play media through your HDMI connection, as well as connecting via Bluetooth, Wi-Fi, and Chromecast.

Though not a compatibility issue, it is definitely worth considering the size of the system.

The 48-inch wide soundbar will sit under a large television, but if you have a smaller screen it can look huge and obtrusive. Keep in mind that there are also two satellite speakers and a large, wired subwoofer to fit into your system.

Price: Is The Vizio Elevate Soundbar Worth It?

When you consider the features, and the fact that this is a large soundbar system, we definitely think that this is competitively priced.

There are a few downsides. Out of the box, the sound could be better, it is a little bit bass heavy, and to get the most out of it you will need to tweak the EQ. A graphic EQ would make this a little easier. At very high volumes, the sound can distort a little bit.

We prefer the Vizio Elevate for cinematic use rather than for music, but with enough EQ tweaking, it can be suitable for listening to immersive audio albums, providing some satisfying results with Dolby Atmos music, without costing the earth.

If you don’t mind satellite speakers and a subwoofer, or the large size of the soundbar, this can enhance your home cinema setup as well as providing an option for immersive music.