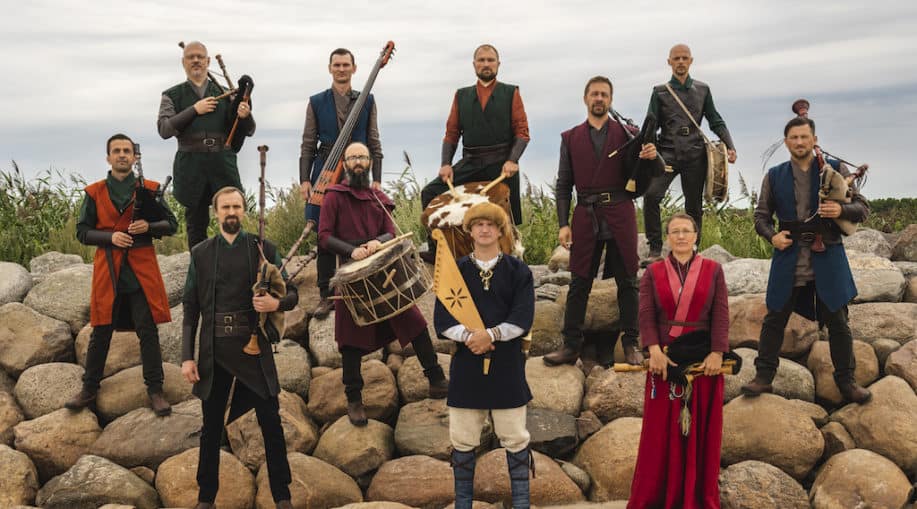 There’s no denying that Visapkārt is one of the more “out there” releases we’ve seen in 2021.
Ben Jacklin
3 min read

There’s no denying that Visapkārt is one of the more “out there” releases we’ve seen in 2021. Auļi is a Latvian drum and bagpipe group, so to say they aren’t afraid of not conforming to convention is perhaps an understatement.

Songwriters Kaspars Bārbals, Mārtiņš Miļevskis and Edgars Kārklis were inspired by the fact that Dolby Atmos is becoming such a mainstream way for people to listen to music, and the rollouts on Tidal and other immersive audio platforms have made this an exciting prospect.

Kaspars Bārbals spoke of his idea to work in Atmos: “Dolby and Avid announced that every sound recording studio will have the possibility to work with Dolby Atmos, provided it has arranged for the necessary adjustments and the results can be published in the streaming platform Tidal – I had no doubt – the new album of Auļi had to be created using this technology!”

The band spoke of the fact they were not afraid of straying away from their main instruments, with “any other instrument that seems suitable” added to the mixes, and it really does add up to an eclectic mix. At times, synthesizers and processed rhythms swirl around the Atmos mix. The album has a beautiful feeling of not being too “overproduced” in spite of a variety of instruments used in the production.

Bārbals spoke in interviews of the concept of “unlimited spaciousness” and this certainly serves as a great description of some of the compositions. Highlights include Jūra, a composition that starts slowly, with traditional folk instruments carrying the track to a crescendo, but there is still space for synthesized sections and beautiful, nuanced production to play a part.

The album comprises 12 different instrumental compositions, some of which stick firmly within the group’s comfort zone. Tracks like “Saules Deja” provide an upbeat flavor of traditional instrumentation, with an almost Celtic feel to the production, something that is furthered in “Zvaigžņu Josta”, which sounds like what we imagine Paul Simon would have created given the same instruments and studio. The Atmos production has its time to shine as the dramatic arrangements and changes of pace.

The bouncy and atmospheric “Kōrklu Polka” is another wonderful example of a track that shows the fun side of Atmos. When so many musicians use this immersive palette to create drama and tension, Auļi make no apologies about using it to fit in a flurry of folk musicians, with instrumental songs full of ceremonial joy. The immersive platform allows, if nothing else, for every musician to have his or her part, the complex arrangements are accommodated, and when you realise the group consists of six bagpipers, three drummers, and a cellist (as well as selected other guests) you can really see why they opted for Dolby Atmos.

The album is not afraid to be different, and I love that about it. If you’ve only ever listened to albums with attitude on your Atmos system, prepare for some medieval folk vibes that you never knew could get your feet tapping along.