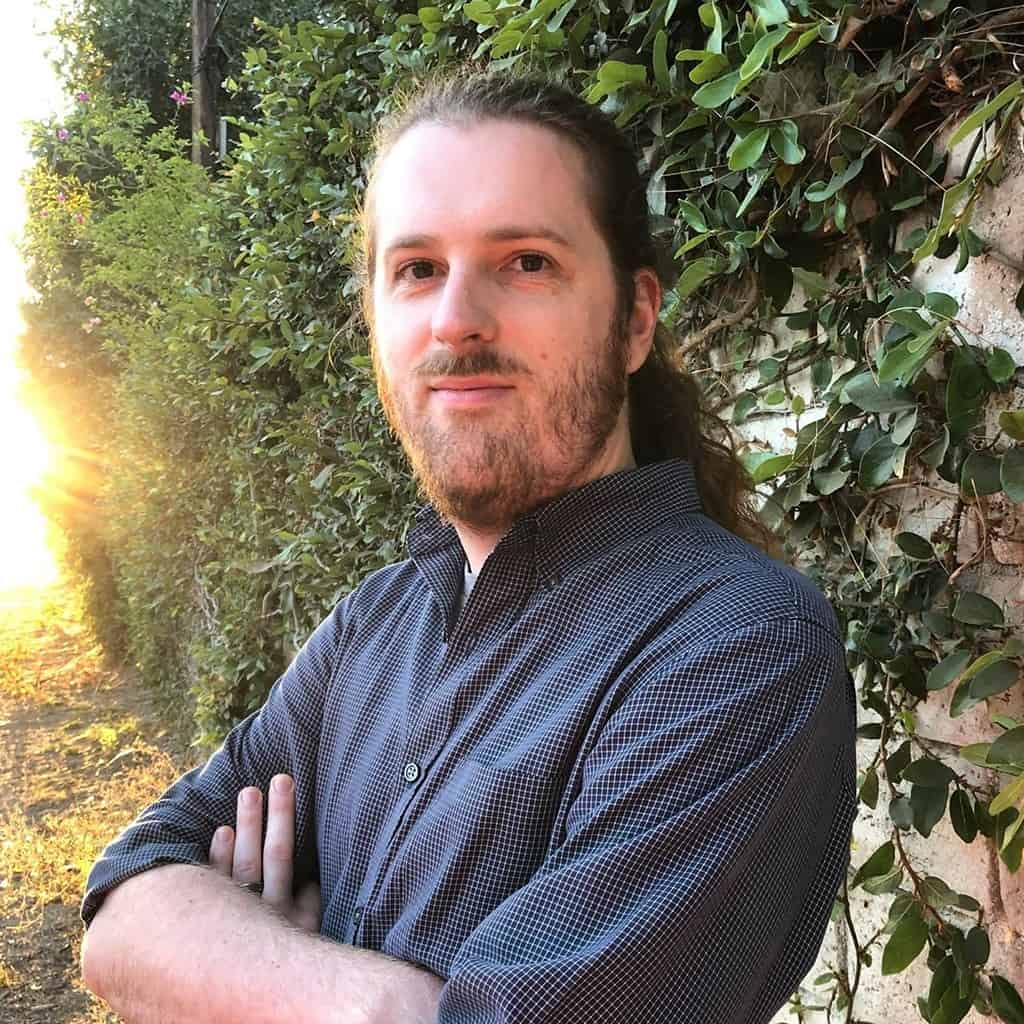 With extensive experience producing music for film and TV projects, Paul Parker is on the forefront of making music designed for immersive experiences.
The IAA Team
8 min read

With extensive experience producing music for film and TV projects, Paul Parker is on the forefront of making music designed for immersive experiences. With the recent release of his electronic album Provenance in 5.1 surround sound, we wanted to connect with him about its production and how he developed a new electronic music instrument to enrich its sound in multichannel audio. Read on to learn more about the album, its influences, and his vision for the future of surround sound and immersive audio music.

As a creator, do you feel your work is mostly scientific, artistic, or a balance of both?

There’s always a fine line between the two when it comes to electronic music. For me, the answer is always artistic. It can be hard to keep the science side from taking over sometimes, but ultimately the determining question for me is “does this enhance the emotional impact of the music?” Whether it’s twelve-tone/serialism or modular synths, if you lose sight of that then you’re not making music anymore.

You started your own company, Barcode Industries. Tell us about its origin and why you wanted to create your own instruments.

I started Barcode Industries with a focus on making electronic instruments for the Kontakt platform. One of the most important aspects of the instruments we make is the user’s ability to modify sounds and create their own patches. So many other electronic instruments for Kontakt are really just cool samples that can’t actually be modified by the user. I shudder to think how many hours I’ve wasted trying to turn off an arpeggiator or modulation effect in various other Kontakt instruments only to find it’s baked into the sample.

I also want to make instruments that offer deep possibilities but are intuitive to use for both new and experienced electronic musicians alike. When I was first getting into electronic music, a little over 10 years ago, I had a hard time navigating the soft-synths I had access to at the time. I felt like an idiot for not being able to figure them out, but looking back, it wasn’t my fault at all - a lot of the user interfaces at that time were atrocious and made programming them way more difficult than it needed to be.

You’ve done great work at Barcode developing the BEYOND engine for Kontakt; what makes this a unique tool for musicians?

First and foremost, I think it has a very unique sound character. Each of the sound sources have an individual character about them. Sonically, they’re somewhat like wavetables but much more alive. Wavetable synthesis can be very sterile, but in BEYOND each voice articulates and continues to develop as a note is held.

Another thing that is unique about the BEYOND engine is that it can be used for multichannel audio in ways that no other synth can. By routing sound sources through individual outputs, BEYOND can create some really immersive pads and really interesting sequence patterns that play with the surround field. You can hear this in action throughout the album, Provenance.

Your album Provenance showcases a lot of features in the BEYOND engine. Tell us how the album came to be, and why you chose to make it in 5.1 surround sound.

It does indeed! In fact, the entire album was produced almost exclusively with BEYOND. I’ve been working in surround audio production for most of my career. Touching back on your first question, for me it brings elements to the table that help tell the story of the music. There’s spots on the record that really come to life with the use of surround panning. There’s some other places where the mix breaks down to mono and then explodes into full surround. While the effect is still present in stereo, the impact just can’t be compared to how it feels in 5.1.

You’ve worked with sound for a variety of project types. What is your favorite type of project to work on: music, film, or TV?

Music has always been where my passion lies. Working in film and tv is great because it’s a platform to be heard, especially for immersive audio. But it was very freeing to work on this album. To make music just for the sake of making music. And producing it in surround because I wanted to - not to fit some spec or delivery requirement - was a really rewarding process.

In film, the music exists to support the drama on screen and it usually takes a back seat to dialogue and effects, rightfully so. But sometimes it can be very frustrating having all of the details of something you’ve worked so hard on washed away by a bird chirping in the background. Creating something where the music is the focus and every detail will be heard was very fulfilling.

What is your most memorable moment or proudest achievement you’ve had in your career thus far?

You know, one might expect me to say, “the first time I heard my music on television” or “being nominated for an Emmy,” but really creating this album, Provenance, is something that I am extremely proud of. Not because of any commercial success or anything so tangible, but because it’s something that I feel really represents who I am as an artist. That’s something that is surprisingly hard to do and also something that not many people have the opportunity or even the time to do.

In your opinion, what is one of the most exciting recent or upcoming developments in surround sound or immersive audio technology?

That’s such a hard question to answer because things are moving SO FAST right now. I’m a big fan of being in a room with a bunch of speakers and truly being immersed in audio. So I’d probably have to say the momentum that Dolby Atmos currently has as a viable commercial outlet for surround audio in a consumer market is really exciting. It has the power to serve the huge market of people listening in mono on their mobile device but also allow me to listen to an uncompromised surround mix, which is incredible.

How have you seen the role of electronic instruments and software tools change music over time, both in the creation process and in the end-product?

The tools we have and our accessibility to them very much affect the sound of current music. Take the 808 for example - probably one of the most iconic drum machines of all time. Why did it explode and end up on nearly every track written in the last 35 years? It sounded unique, yes, but more-so music equipment at the time was astronomically expensive and the 808 is what the DJ’s producing underground hip-hop at the time could afford.

Now, almost anyone can access the tools needed to produce a hit record. The amount of options are overwhelming really - but what’s out there, be it a kick sound or a vocal loop, still ultimately guides us in the choices we make and which musical styles become popular. That’s part of the reason I set out to make my own instruments, both to make my own completely original content and also to be part of a greater atmosphere of musical choices being made.

What album would you personally most like to hear in a surround sound or immersive audio format?

I’m a huge fan of Imogen Heap. A few years back she released a 5.1 mix of a song off of her album, Sparks. I’ve always wanted to hear the rest of the album, or any of her albums for that matter, mixed in surround.

And what are you listening to at the moment?

As an electronic musician this will seem way out in left field, but I’ve actually been listening to a lot of country lately. It’s something I grew up around but only recently came to appreciate. I really dig Kacy Musgraves and Chris Stapleton. I’ve also been revisiting a lot of stuff I avoided like the plague as a teenager such as Brad Paisley and Alan Jackson. I’ve always been a ‘melody-over-lyrics’ person, so it’s really broadened my scope as a musician learning to appreciate a song for its lyrical content and how the music and production ultimately supports that.

I find that listening to music completely different than what I am working on is much more enjoyable as well. I was huge into film scores before I started actually working on them. Now it’s about the last thing I ever want to listen to. For me it can also be really hard to be original if what I’m listening to for pleasure is similar to what I’m working on.

Who are some artists or engineers who have shaped your work?

I’ve had a number of mentors that have had a huge impact on my work and my life. I’ve worked with Reinhold Heil on numerous film and tv projects over the past several years. He’s certainly been a huge influence on my production techniques and career development. Prior to that Gary Chang (Breakfast Club, Under Siege) and Lee Johnson (Dead Symphony) had a huge impact on my early interests in music, especially in surround audio.

Tell us what’s next. What is your dream venture?

Honestly, I really love what I’m doing right now and want to keep on doing it! I’ve got some exciting things in the pipeline for Barcode Industries and I’m also mixing and mastering a soundtrack album for Reinhold Heil.

And finally, in one word, how would you describe Provenance to folks interested in your new album?