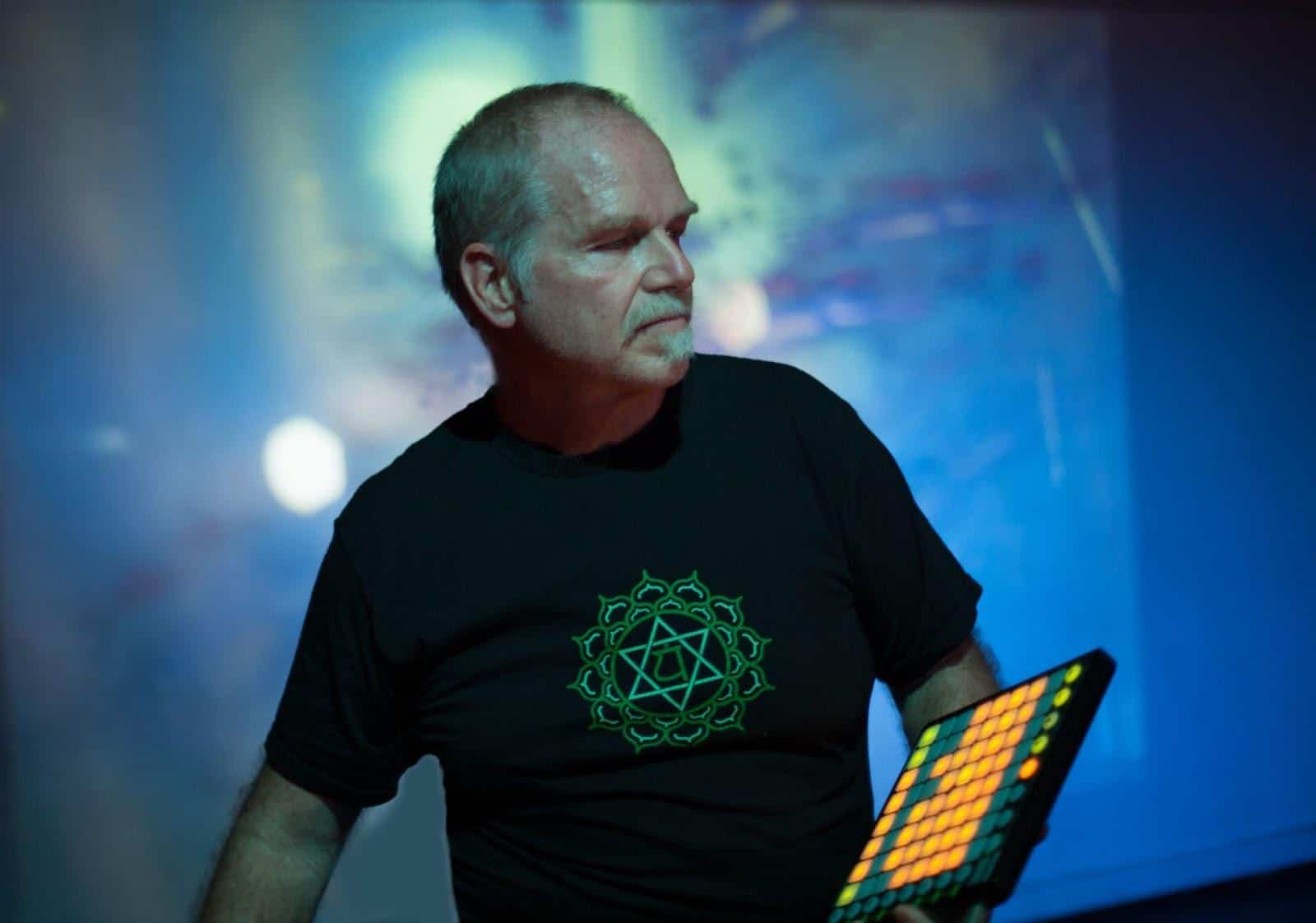 David Miles Huber is a 4x Grammy-nominated producer, composer and musician. He categorizes his ambient and electronic music as “Zen-meets-tech...
The IAA Team
10 min read

David Miles Huber is a 4x Grammy-nominated producer, composer and musician. He categorizes his ambient and electronic music as “Zen-meets-tech.” Huber’s CD series Relaxation and Meditation with Music and Nature has sold over one million copies. His album, Haida - Raven, is available now in the IAA store. In addition to creating music, he's particularly well known for his writing, namely the seminal work Modern Recording Techniques.

In this interview, Huber sits down with IAA to discuss all of the above, hopes and concerns for Atmos, immersive audio, and more.

How did you first get into surround sound music, and what made you want to make this your career?

Well, I don't know if it's my career or not. But it's one of my main passions. When I was really, really young, I attended a major recording workshop, and they had a quad playback of Bernstein's Mass, which was really amazing. Long before that, I remember opening up double-album jackets and putting them behind my head to create a back-reflection from the stereo record player. It really opened things up sonically. You actually heard things in a more interesting and, dare I say it, immersive way. Go ahead and try it with a notebook or anything that's lying around.

When surround came along, I jumped right in. Once I got a very, very basic 5.1 surround system, I was pretty hooked on it. From the very beginning, I've been a Steinberg Nuendo user. So, I've always just stuck with Nuendo, because it makes so much sense as a DAW to me. And it just really, really, really works well with immersive audio. So, from that point on, I started making my own music in both stereo, 5.1 and now 5.1.4. For me, it's just a lot of fun.

So few people actually know what surround music really sounds like. I know this is not part of the question, but this word, “immersive,” is incredibly misunderstood. It's just so broad. Once, I was in a large assembly hall at an Audio Engineering Society meeting where there were like 500 or 600 people. My buddy George Massenburg was presiding and asked, “How many people in the room have actually listened to surround?” About five of us raised our hands - and this was in a room full of audio professionals!

So, there aren't that many people who really understand what it is from a playback standpoint, let alone from a production standpoint.

What is your preferred configuration for your music?

God, quite the question! How do I answer that? I've done 5.1 the most, but I've also done 9.1 (5.1.4) a lot. I think it is really awesome when you add the height channels. It adds dimension to the music. But the potential problems with home playback that come with the added height channels are huge. Many of these problems have been addressed in recent times by the addition of “upward-firing” speakers on soundbars. These upwards-reflecting speakers eliminate the need for actual height speakers. They might have 5.1.4.That's to say five surround speakers, one LFE speaker and four height speakers. More likely, these soundbars will be configured as 5.1.2, meaning that there will be only two upwards firing height speakers that are physically placed on top of the TV's soundbar.

Production-wise, is a lot needed to create those more complex configurations?

Yes and no. When you're using programs like Nuendo, ProTools or Logic and you have an interest in getting into immersive, you can definitely do it. However, I will say that it takes quite a bit of knowledge, system setup and extreme attention to detail to do it right. With DAW programs like these, you can pretty much do anything from 5.1 FLAC, all the way up to Atmos (which is fully integrated into Nuendo 11 and high-end versions of Pro Tools). Personally, I'm just beginning to dive into Atmos as a delivery medium. Since I have a full 5.1.4 room and many mixed projects, it's just a matter of time before I deliver my music in this format.

The industry is moving in the direction of Atmos. Do you think it will catch on to more audiences?

Going back in history, I mentioned the word “quad,” right? How did quad die, and why did it actually go away? It died because of competing formats. There were records that required a very special record cartridge for playback, as well as special amplifiers or required extra speakers. That's okay, except that RCA had their own system, Columbia had a different system, and Sony had a different system. There were three systems that were completely incompatible with each other. People would spend thousands of dollars on a system, and then their favorite record would come out on a competing system. Disaster!

So now, the great giant Dolby is coming in with their strong arm and saying this will be the next greatest format. That’s all good and it probably will, and it makes a lot of sense. But we're still in the baby stages of Atmos. Most people don't realize that you have to almost completely re-tool your playback system to be Atmos compatible. It's not always easy and it's usually expensive. Not to mention, that at this time, the number of Blu-rays that are encoded in Atmos are in the comparative minority.

What is your studio setup at home?

I'm lucky enough to have a full 5.1.4 system. My main surrounds are PMC (a high-end British speaker manufacturer), while the overheads are JBL Series 3 (cost-effective and amazingly powerful speakers that fit the bill well).

Do you have any tips or words of wisdom for engineers that are just getting started with surround sound production?

The main thing is setting up your room properly. The Grammy Organization has guidelines for surround setup. Beyond set up, making sure your levels are acoustically matched (using an SPL meter or your cell phone) is critical. Pay extra attention to the LFE (low frequency effect) channel. Remember that it's not actually a sub, but more of a box that adds extra support to the low-end. It's important to realize that LFE means something totally different to a music mixer, as opposed to someone who mixes for film. Beyond this, it's just called “experiment your butt off” and have fun with it. There are no rules. You can basically do whatever you want.

That's the thing about immersive that I love so much. I've never stuck to the “rules” of 5.1 or immersive, and this is probably why I have all those Grammy nominations. Most people will do left and right, with a little bit of a center with a little bit of reverb in the back. That's the traditional classical or rock way of thinking, but I do electronic music. And as a result, I just do it full out on all speakers and just make it fully envelop the listener. With my music, you're literally surrounded with tracks, delays and movement. Not all surround projects are like that.

Do you think that there's a particular genre that's best suited for surround sound experiences?

I don’t think so, as long as it sounds good. I don't think there's any best music for immersive. Morten Lindberg (of 2L, who is also on IAA) is absolutely brilliant. The way he approaches classical recording or immersive is entirely new and different. He basically created a new genre of classical recording.

Do you have any favorite surround artists?

Thievery Corporation really struck me really hard. With them, you get a balanced stereo from all the four corners of the 5.1 field. It's amazing. They use all the speakers full out as well. Fan-wise, I'm more of a maker than a listener. Outside of the studio, the only playback that I can listen to 5.1 is in the bedroom, where the TV is. I can make 5.1.4, but I have no way to playback outside media.

Is there a reason for that?

This part is so important to me. Who uses surround music? Gamers use surround. Television uses surround. Film uses surround. And there are a lot of companies - a lot of major companies - that completely ignore the integration of surround into their audio interface systems. I’m not going to mention any names, but I had my old interface, which could totally play surround media over Windows, but a new version of the interface can't. So if you put a surround disc into the disc player, there's a really good chance that it'll only playback in stereo. It's VERY frustrating. Trying to get the various media types, pro audio, home audio/video, film and gaming to actually communicate with each other is a relative nightmare.

Do you feel as though you have hope for the future of immersive audio? Is Atmos something you'd like to explore eventually?

Most likely. Like I said, I have the mixes and the playback system. Down the road, Atmos might be integrated or available to Windows and Mac OS for playback. Home A/V adoption is underway, but a lot of education is needed, so that people don't make costly mistakes.

Everybody's saying, “Oh, it's so simple.” “Oh, it's the future.” In actuality, it's incredibly detailed and really finicky to implement from production all the way to delivery. It's not easy stuff, and when you start getting into production with any form of immersive, you really have to start learning the P's and Q's (and about eight other letters while you're at it).

Are you working on anything currently that you’re allowed to share?
Haida is just about to come out in Auro-3D. It's a double disc Blu-ray set. Got another project, but we'll see what happens with that.

What makes Auro stand out to you?

It has height channels just like Atmos does, but it's a little bit more straightforward system-wise. Atmos actually drives sounds around the room, whereas Auro is dedicated to the 5.1.4 speaker array. They're both really good at what they do. It's just that Auro-3D is more music oriented, while Atmos can be thought of as more film/visual media oriented.

The other thing we wanted to get into is the writing side. I know you've authored quite a few books. What drew you into that side of the business?

I was 23 years old with Modern Recording Techniques. It is the world standard text. We're in the ninth edition now. And also, I just finished the fourth edition of the MIDI Manual. Those are major books in the field. I’m probably primarily known as a writer. Almost everybody who started recording has read my book. I've been very lucky.

When you were 23 and you wrote that, what inspired you? Was it the fact that you didn't see anything else like that around and you wanted to create that?

No, nothing like that. I wrote a little booklet called A Musician's Guide to the Recording Studio, which was about 12 years ahead of its time. I went to the publisher (at that time, it was in Indianapolis. I'm originally from Indiana) and said, “I have this booklet of A Musicians Guide to the Recording Studio. Would you be interested?” They said, “No. However, we had this book on recording techniques. The original author can't do it. We can't find anybody. We have to make a decision today. Can you do it?” And I spent my entire life being able to answer, “Yes, I can.” And it turns out I write really well.

Yeah. So I've lived off royalties since I was a young man. I've been lucky enough to have a knack for writing and music making.

You can check out David Miles Huber’s music here on IAA or davidmileshuber.com.