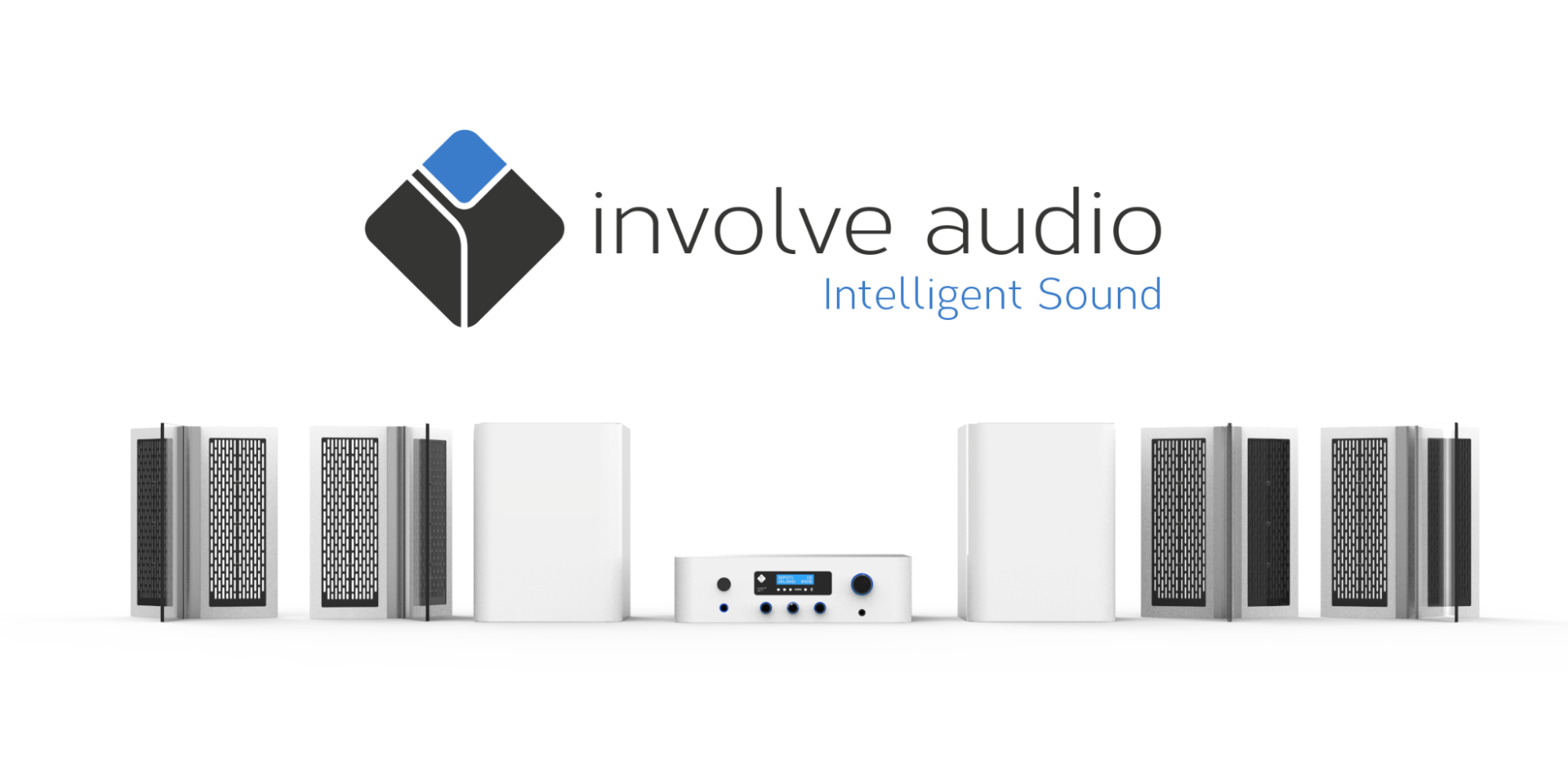 Involve Audio is a promising tech startup based out in Melbourne, Australia with a focus on immersive audio. They currently offer a number of compact, modular, immersive-oriented products including the Surround Master (a preamp/processor with real-time stereo-to-surround enhancement ability), the Amp Master (a compact, but powerful 5.1-channel power amp), and the Y4 electrostatic speaker system.

4.0 or 5.1 surround sound may seem antiquated in the age of object-based immersive formats like 7.1.4 Dolby Atmos or 5.1.4 Auro-3D with height channels, but there is a refreshing simplicity to the Involve product line. All three devices can be easily connected without the sea of RCA cables all-too-common to home theater setups today, yielding a simple yet powerful surround sound system for the uninitiated user.

What Exactly Does The Surround Master Do? Some Background On Matrix Technology:

In the early 1970s, when the major record labels began a short lived experiment of remixing popular albums in quadraphonic sound (an early form of immersive audio that utilized four full-range speakers arranged in a square formation around the listener), audio engineers and equipment manufacturers were given an impossible problem to solve. Vinyl long-play records, the most popular music format at the time, were incapable of carrying more than two channels of sound. If the new quadraphonic format was to catch on and ultimately supersede stereo as its architects envisioned, it would have to be available on vinyl LP.

A solution to this issue ultimately arrived with the invention of a process known as surround matrix processing. The key concept behind surround matrix technology is the ability to encapsulate four channels of audio inside of a stereo-only medium, such as the vinyl LP, using acoustical phase manipulation.

Studios outfitted for quadraphonic mixing in the 1970s used a matrix encoder (a large piece of outboard gear with four inputs and only two outputs) to collapse the original four channels of audio into two. This new two-channel “encoded” master was used to manufacture quadraphonic LP’s. The consumer would then have to purchase a matrix decoder (a preamp-like device with two inputs and four outputs) to convert the two channels of audio on the LP back into four channels on their home quadraphonic system.

Clever as this process was, it had a critical flaw: imperfect channel separation. Immersive music mixes often feature instruments or voices isolated behind or in front of the listener. The process of playing back a matrixed quadraphonic LP will inevitably alter the positions that the mixer assigned each element that makes up the album.

To make matters even more confusing, several different incompatible matrix systems were brought to market by different labels. To properly listen to CBS’ quadraphonic albums, you’d need to purchase another piece of gear that wouldn’t work with ABC’s quadraphonic LPs.

Though poor matrix processing technology contributed to the critical and commercial failure of quadraphonic sound, it also became its most enduring legacy. Quad enthusiasts at the time realized that their matrix decoders would also produce an often convincing faux surround effect from standard stereo vinyl.

Equipment manufacturers such as Dolby Laboratories continued to improve on stereo-to-surround processing, or “upmixing” as it is colloquially referred to, over the next several decades. Some flavor of “Dolby Surround” processing still comes built-in to most audio/video receivers today.

With the Surround Master, Involve Audio has introduced their own matrix process into a market already overflowing with options. The basis for Involve’s encode/decode formula is the Sansui “QS” matrix (also referred to as the Regular Matrix, or “RM”), which a handful of labels such as ABC Records and Impulse used for their Quadraphonic product in the mid-70s.

The Surround Master V3 comes packaged in a square, compact box embossed with the company’s logo. Inside the box, the unit is housed alongside a power supply and six high-quality RCA cables.

Though I’ve owned a Surround Master V1 model since 2015 and was skeptical it could be improved, the new V3 model is a serious upgrade. The cheap plastic case of the original has been replaced with high-quality metal casing, embossed with the company’s logo. Whereas the original only had two surround decoding options (“Involve” and “SQ”), the new model adds Involve’s patented two-speaker-surround (TSS) system. Perhaps the most notable addition are the volume controls, both individual knobs for each channel and a master level.

Though the V3 model adds an optical cable for easy connection to a CD player, HDMI remains a notable omission–especially with the troubling trend of new AVR units foregoing an analog 5.1 or 7.1 multi-channel input.

I used the following equipment to playback and capture the SMV3’s output:

It’s important to note that when it comes to matrix decoding of a vinyl source, the user’s phono preamp and/or cartridge can definitely affect the results (in terms of both sonic clarity and channel separation).

To effectively audition the Surround Master V3’s “Involve” 4.0 surround synthesis mode, I used a song called “The Voice” from The Alan Parsons Project’s classic album I, Robot (1977). The phase information and wide stereo spread inherent to this recording will likely yield some interesting effect from almost any stereo-to-surround processor, but the Surround Master V3’s 4.0 presentation sounded almost like a real matrix quadraphonic LP!

Synthesizers and percussion gracefully dance around the four corners while the lead vocal and bass guitar stay locked to the front center position. Though I patiently await the day Alan Parsons revisits this album with a new 5.1 or Dolby Atmos, the Mobile Fidelity half-speed LP through the Surround Master V3 will more than suffice for now. I tried the two-speaker-surround (TSS) mode with the Parsons track as well, yielding a surprisingly wide soundstage with just two speakers in play.

I also took the opportunity to compare the Surround Master V3’s SQ matrix decoding capabilities with discrete quad versions of the same recordings where applicable. As many in the surround community are no doubt aware, reissue labels such as Audio Fidelity and Dutton Vocalion have reissued dozens of CBS quadraphonic albums from the mid-to-late 1970s in the Super Audio CD format.

Due to the flaws of the SQ matrix encode/decode process, it’s unrealistic to expect the SMV3’s vinyl decode to equal or rival an SACD disc sourced from the discrete four channel master tape. That said, it’s also unrealistic to expect all 400 or so CBS pop quadraphonic albums issued from 1972-77 to be reissued on optical disc.

I would also add that CBS’ quadraphonic albums tended to feature very aggressive, engaging surround mixes that rival a lot of the new 5.1 and Atmos material available today. The rear channels are treated as equal partners in these recordings rather than a supplement to the front, featuring loud, isolated instruments for a “center-of-the-band” listening perspective.

The first song I auditioned was “Happy Man” from Chicago’s seventh album, originally issued on stereo & SQ quadraphonic LP in 1974. There was also a discrete version of the quad mix issued on 8-track tape and later Blu-Ray Audio as part of the now out-of-print Chicago Quadio deluxe box set.

The decoder does an effective job of largely isolating the acoustic guitar in the right rear speaker after the false start, but the soundstage becomes less precise as the other three channels enter the picture. The rhythm section is clearly arrayed across the front channels only on the Blu-Ray disc, while it sounds like it’s coming from all around on the vinyl quad presentation. I also noticed that the lead vocal seemed to extend further into the room on the vinyl, whereas it stayed pinned to the front speakers only on the Blu-Ray.

Finally, to evaluate the unit’s performance with Sansui QS matrix-encoded material I used the quadraphonic LP of Rufus & Chaka Khan’s classic 1974 album Rags To Rufus. The opening track, “You Got The Love,” kicks off with a choppy Nile Rodgers-esque funk guitar lead in the right rear speaker only. Through the Surround Master V3, the four channel image created by the decoded LP almost matches the discrete Q8 tape without the sonic drawbacks of the 8-track format.

The unit’s performance with QS-encoded material is phenomenal, but – at least in my view – there’s only a handful of desirable titles in this format from the likes of Steely Dan, Joe Walsh, Jim Croce, The Four Tops, and the aforementioned Rufus.

The Surround Master V3 is a powerful piece of gear for the surround enthusiast, with a number of interesting applications. Ultimately, I think it’s fair to say that most would be interested in purchasing primarily for its ability to effectively process stereo into an often-convincing quasi-surround. In this regard, I feel it is superior to systems embedded in modern AVRs such as Dolby Pro-Logic II and DTS Neo:6.

However, its ability to accurately play back vintage quadraphonic LPs is what really makes it a critical and unique component in my stereo system. It’s great to be able to achieve these kinds of results with quad material in 2022 without having to invest in a piece of used hardware like the Sansui QSD-2 or Fosgate Tate 101A.