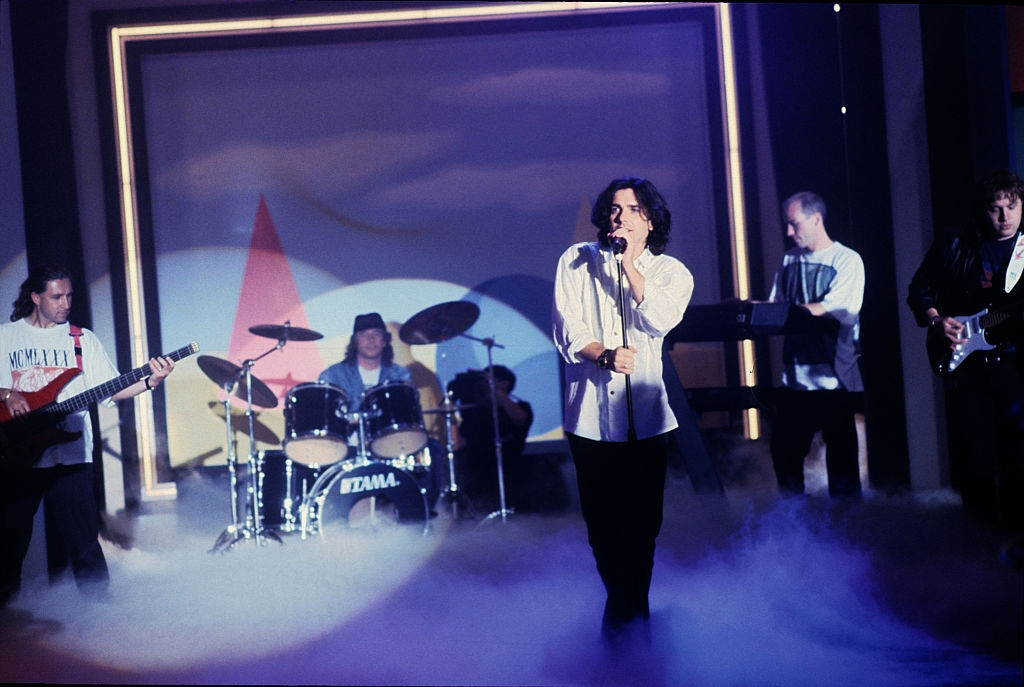 Marillion’s ongoing reissue campaign has been among my favorites of recent years, revisiting the eight albums the band made under the EMI umbrella from 1983-1995 with new stereo & 5.1 surround remixes. The band’s music evolved quite a bit during those years, gradually morphing from the Genesis-esque first two albums with original lead singer Fish into the more accessible alt-rock sound of Afraid Of Sunlight (1995) with new vocalist Steve Hogarth.

Holidays In Eden (1991), their sixth studio album and the second to feature Hogarth on vocals, is the seventh and penultimate reissue in the series. Produced by Christopher Neil (Sheena Easton, Mike + The Mechanics), the album reached #7 in the UK Albums Chart and featured the UK top-40 single "Cover My Eyes (Pain and Heaven)."

As the liner notes detail, it definitely sounds like there was an effort by the band’s management to reform their image and re-package them into a crossover act. I wouldn’t say their unique identity and style are completely lost under Neil’s production – “Splintering Heart” is one of my favorite Marillion songs with Hogarth’s vocals – but “Cover My Eyes” and “No One Can” feel like misbegotten attempts to score a hit single. After all, it all took one successful single (1985’s “Kayleigh”) to change the band’s fortunes just a few years earlier.

Interestingly enough, there’s been a different mixer at the helm for each of the Hogarth-fronted albums reissued thus far: Steven Wilson – who witnessed the band’s first ever live performance at the Berkhamstead Civic Centre in 1980 and co-produced the mariilion.com (1999) album – tackled the remixes of Brave (1994) back in 2018, while the band’s longtime producer Michael Hunter remixed Afraid Of Sunlight (1995) in stereo & 5.1 for the 2019 reissue.

This time, the band has tasked Stephen W Tayler – best known for his recent stereo & 5.1 remixes of the Be-Bop Deluxe and Van Der Graaf Generator catalogs – with the remixes. Stephen told us a bit about the project this past March:

Though some of the reverb on Hogarth’s voice and overall ‘polish’ has been stripped back, that ‘90s sound is still prevalent on the new mix. I actually found that some of the dated keyboard sounds stand out even more than before, particularly in the 5.1 surround mix where they’re usually isolated in the rear speakers.

Similar to last year’s Fugazi (1984) 5.1 remix, this is very much a “listener in the center of the band” multichannel experience. The rhythm section, lead vocal, and main guitar parts are usually assigned to the front speakers, while keyboards, backing vocals, and the occasional rhythm guitar burst forth from the rears. Unlike in the 5.1 remixes of Brave and Afraid Of Sunlight, Hogarth’s appear in all three front channels rather than residing solely in the center speaker.

Though the 5.1 mix does reveal a lot of hidden detail – the group backing vocals in “Cover My Eyes” and “No One Can” are clear as day in the rear speakers only – having all that higher-frequency information pushed out to the rears seems to have the unfortunate side-effect of washing out the lead vocal upfront, especially during the busier passages with dense instrumentation.

The intro to “Splintering Heart” sounds fabulous in 5.1, with the atmospheric keys crawling in from the rears as Steve Rothery’s shimmering guitar textures filling up the entire listening space. “The Party” takes on a noticeably different balance in the remix, with the electronic percussion samples highlighted at the expense of Ian Mosley’s drum kit.

My biggest gripe with both the stereo & 5.1 remixes would have to be the loss of dynamic range. As soon as Steve Rothery’s screaming guitar enters around two minutes into “Splintering Heart,” the compressor clamps down and sucks all the excitement out of the track. The same goes for the choruses to “Cover My Eyes” and “Dry Land.” They should be explosive, yet they sound crowded and lifeless. It would be interesting to hear what this 5.1 mix sounded like prior to mastering, assuming the dynamic compression wasn’t already extant in Tayler’s mix.

Spatially, this is probably one of the strongest 5.1 remixes in the series: the rear speakers are active and well-utilized throughout, but the frustrating sound quality drags the overall experience down a few notches for me. It’ll be interesting to see if Tayler is invited back for next year’s reissue of Seasons End (1989), and if the band chooses to continue the reissues past the EMI era. Count me in for a Steven Wilson Dolby Atmos remix of Marbles (2004)!